The following is a sample of a magazine article published by Imagine Publishing, a world leader in multimedia publishing, for GamesTM, their flagship publication for the gaming industry.

TITLE COPY:   How £100 kick-started one of the greatest BBC Micro and Acorn Electron publishers of all time.

BODY COPY: The 1980s is held in reverence as a time of great growth and development in the gaming industry, a time of genuine opportunity. Where modern blockbuster games are the result of hundreds of staff working in large offices with multi-million pound budgets, in the early 80s new developers could start-up with minimal investments and very limited teams.

It was in this scene that now famed game developer and producer Richard Hanson founded Superior Software with John Dyson. “I’d graduated with a B.Sc. in computational science,” says Hanson, “I’d written a number of games that were sold by software publisher Program Power, and I had some knowledge of marketing and business management. I felt sure [Superior Software] would be an enjoyable, interesting enterprise.” The cost for setting up this now fabled company? “[John Dyson and I] each put £50 into the business, and this was the most that we would lose if the business had not taken off.”

Being a time when a single-man developer could produce a complete game within a month, the talented duo of Hanson and Dyson quickly produced their first four games. “In autumn 1982, John and I coded Superior Software’s first four games ready for publication: I wrote three of those games, and John wrote the other one.”

So far from the days of Youtube, to promote their games Hanson and Dyson used the most traditional of advertising spaces: the press. “We initially placed a small black-and-white advertisement in one of the early home computer magazines – I think our first ad was in a magazine called Computing Today.”

For the most part, Superior Software’s early games are not regarded as their best. They did, however, prove to Hanson that success within the gaming industry was possible. “We were delighted by the response we received to our first advertisement—the level of sales covered the cost of the advertising several times over,” says Hanson. “So we placed more advertisements, gradually increasing the size and taking more prominent positions in the magazines. We also started to invite other software developers to submit software to us for evaluation and possible marketing.”

Many of those submissions came from enthusiastic university students, such as Peter Johnson, who had taught himself to program games while studying at university. “I took a HND Computer Studies course at Newcastle Polytechnic (now ‘Northumbria University’),” says Johnson [game designer for Overdrive]. “The coursework used COBOL and BASIC running on computer terminals and teletypes, and trained students to become Systems Analysts long before anyone would consider providing a dedicated games course at University.” Johnson, however, was far keener to learn game design. “I had a BBC Micro, so I used the time I should have been studying to teach myself assembly language programming instead.” 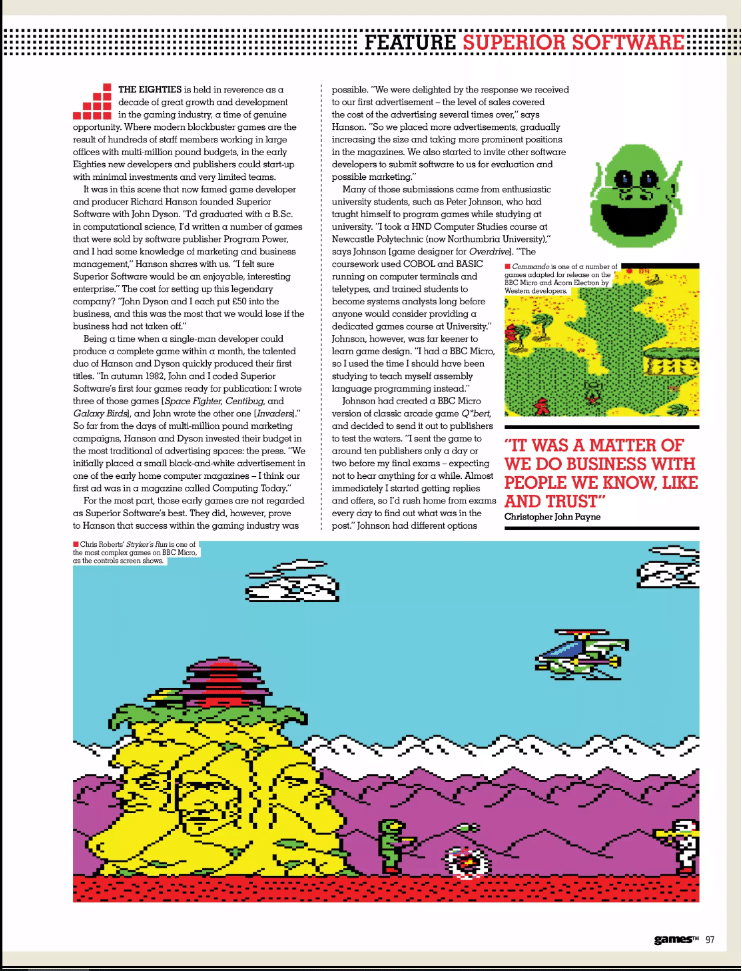 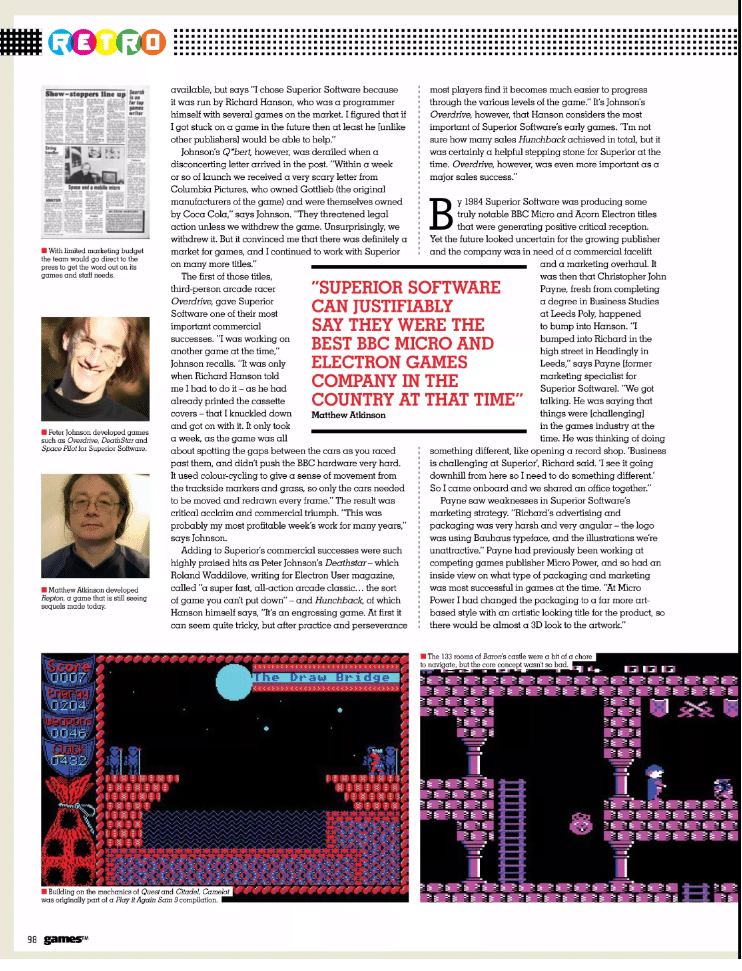 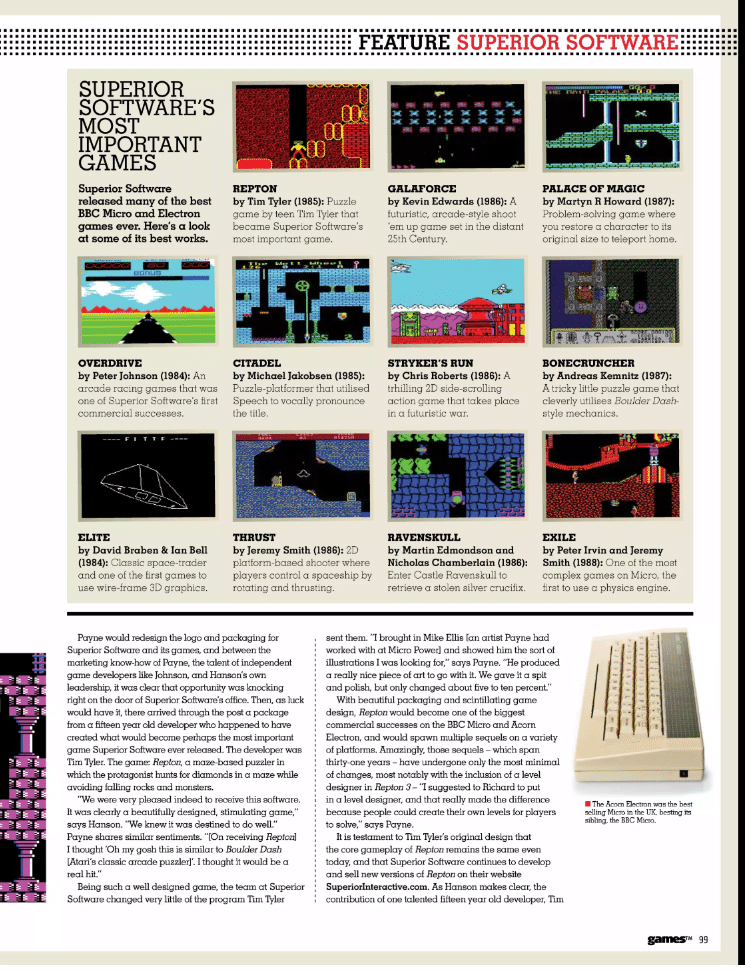 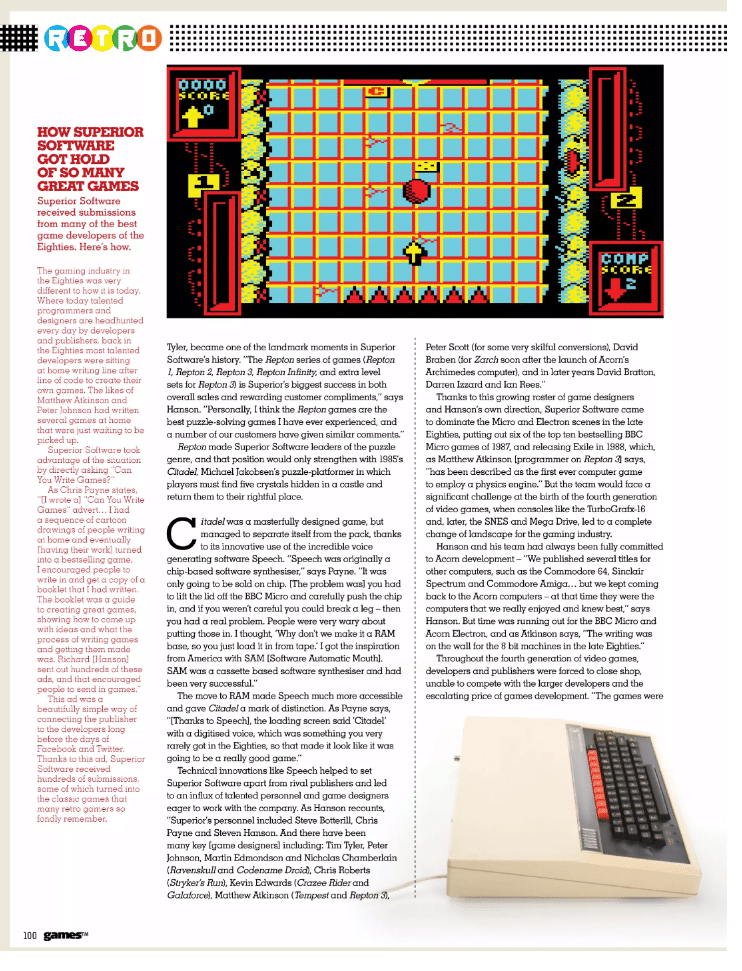